So! Here's a maybe-not-so-brief excerpt of my Experience with the WOW gang! My first ever Trek Expedition

A Trek to Rayakottai and Krishnagiri Fort (near Hosur)...[nothing technical about the Trekking activity as such, you can find them via Wiki / google ;) :P]. Just sharing my experience...


With little brain-racking on "should I - shouldn't I", I enrol myself just 2 days before the event (with no planning done before). My first ever trek! Surprisingly, I get shortlisted, and then what followed has become an impressive memory of my life...Read on...

Just a day prior to the event, I get a mail saying that there have been last minute changes and the mode of transport now changes from Road to Rail...and..Unreserved!.. fun had already begun..B-)


The Introduction:
This was a gang of 19 shortlisted gals (from different places across Bangalore), very few of whom had known each other - few first timers as well (including em!) We were to assemble in the Train, (Salem Passenger) from different junctions in Bangalore. And, as the history goes, this mode of transport, had turned out to be a very efficient mode of Ice-breaker, with the gals teaming up with ease, and of course, cracking very 'organ'ized jokes :D

In the jampacked Unreserved bogie, we did manage to reserve seats for few our counterparts that were to join us. And in the end, we were scattered everywhere (even near the Gate...AHEM...door ;) !).

Must say! The group dint look any less than the Chak De! gang, ready to take on the adventure that lay ahead. A better thing being , a Lady leading it B-) 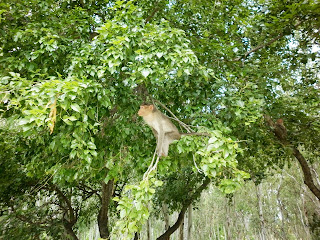 Alight at Rayakottai station, meet-n-greet the monkeys who looked at us like any other among them, and bravely cross the Railway tracks with calculated risks ;), with a train heading on one of them (Ghulam-ishtyle)!

After having delicious breakfast (the Pongal was damn good!) and tea, we headed towards the trek base, after a formal and a more ORGANised INtroDUCTION to each other!! B-)


The Ascend:
With a couple of clear instructions and tips from the organizer Ajju, the teams started ascending along the trail, to reach the Peak. Puff, pant - but get there - of this, everyone was clear!

The leading ladies did a brilliant job, tracking the routes - allowing the rest of the team, to comfortably follow them - as they waded along the rocks and the Fort remains.

The gals started bonding better n better, with each helping the other at a li'l steep climbs, halting where anyone felt a need for a break, cracking more jokes, the whistles and of course - the crazy photo sessions.

Few paths along the trail were a real Challenge, and few were just a chilled step-walk. The view turned more and more spectacular as we touched altitudes.

Do I need to express that in Words?? All I can say is - It was Worth all that puffing, panting and clambering!  Nature at its Magnificent best, offering an Eye-treat! Human Civilization at bay. All that was there was just Mother Nature and 19 brave ladies on the Top of the world!! B-)


Weather:
This was a real Blessing I'd say! The Clouds, the Sun and the Wind gods did a perfect balance act - that made both - the Climb and the Descend - more inviting and fun! This had to be just that perfect sort of a trek with nature rejoicing alongwith the WOW ladies:), making it just the right climate to enjoy nature's beatitude :D

Amidst all the wilderness of the nature, and during the rock climbing adventure - playing goatherds was an extra addition to the fun! At a couple of narrow, and the only paths leading way to the Peak, it suddenly became inevitable to carry sticks to direct the goats out of our way - specially the ones with sharp horns rocking along with us (read - BEHIND us)! Halting at intervals , turning back, and shooing them away was quite a challenging task! . Yeah..it may sound comedy..but when your butts are direct targets to sharp little horns, that too,  at the peak of a hill, it ain't B-)

Well..to those who can relate to this ->; I'm skipping the 'Mmmaaah' part of the goat story here for privacy purpose!

After all the Victory celebrations, WOW flag hoisting on the peak, sight-seeing, photo sessions, howling n whistling (phew!).. and a bit of dancing - it was now time to make the descend.

Though it happened a bit faster than the climb, must admit, this wasn't as easy a task as it seemed ! (did scare the hell outta me at places - with a few slips here n there :-|). Thanks to the girls, who were always there, watching each other and taking care till we safely and successfully made it to the Trek base:)

Climax
Triumphant, worn out and with little aches and pain, we reached the station and learnt that the train was late by half an hour. Taking this opportunity, few of our ladies turned into their gharelu avatar and shopped in the subzee-mandi right outside the station , adding a feminine touch to the whole adventure. [Now! this is what I appreciate about womanhood. No matter how much heights you conquer, your ultimate theme of life is always family n food :P!]

At the platform, while waiting for the train to arrive,  few shared their trekking experience, and few did also share tips to recover from the post-trek aches (really useful!). The adventurous journey had now become a memorable 'WOW Experience' for all of us...

Well..women have this trait of getting thrilled for reasons which may seem trivial for others...:P Sharing one such thrilling discovery [which really made me wonder] during the return journey..Here it goes...

Like the arrival, the return journey was also to be UnReserved :D Considering that the halt at Rayakottai would be only for a couple of minutes, we decided to split and get into the train first and then sort out each other.

Train arrived. We split ourselves haphazardly into 2 separate groups and accomodated ourselves in two consequent bogies. To our luck, the crowd cleared to a great extent at Hosur, and we got space enough to be seated comfortably.

Now, Monu (a friend, and a co-trekker) n I [both proud Sagittarians] continue our yapping about being Saggis [something that we've been bugging few ppl with throughout the day :D!] Surprisingly, it so turns out that the ones with whom we had  randomly split with were all Saggitarians! To add more surprise, we learn, that few ppl seated in the other bogie were also Saggitarians!

So here, our discovery was that,  the World of Women, had a world of Saggitarians in it! [yeah.. sounds stupid and trivial, but for a Saggi its Thrilling and for women, it's even more :P ]

We reached our respective destinations. With loads of awesome memories, we bade each other good-bye and started out to our respective abodes ( with promises of meeting again in more such events).

Absolutely loved being with the people..

What other better way to describe the experience. It was just - WOW! B-)


Highlights:
1. I learnt that the World Of Women [WOW] is Bangalore's first ever all-women trekking Club. And m very proud of it!
2. Food - Thanks to the ladies whom the Organizer calls 'youngest-at-heart' in the team, for being kind enough to pack food for WOW '19 - this too, a Surprise! We dint miss Home :) Hats off!:)


Thanks to one and all involved, especially the ORGANizer and the INtroDUCER :) You guys really kept us entertained :D Looking forward for more such fun-filled n exciting adventures and more discoveries :):)


well..the author's Story doesn't end here :P..it's got a fairy-tale touch to it!

Well, an avid reader as I have become; very few know that I'm currently reading the story of my childhood favourite Heidi. To my amazement all of this - the trek plans, the rock climbing and the goats too! - somehow miraculously happen exactly the way the book describes in the page I had last read (in fact I get the information about this trek activity exactly after I stop at the page where the character Heidi goes to the mountain alongwith the goats!)....