October 19th...
·        What happens when 20 strong and hot girls step out to tame a Monolith together? – The Sun smiles brightly

·        What happens when difficulty level on a trek increases – We start conquering fear!

·        What happens when North-South meets each other in the game of Dumb Charades –  (un) moonji-lia-sum becomes Mughal-e-Azam, Bewafa becomes Pai-wa-fai and Rajathiraja becomes Raja-the-Raja :P

Yes. All of the above and more - is what we really did in WOW’s fifth trek (my third one) to one of the largest monolithic rocks in Asia – Savanadurga.

Well, Bangalore has a strange problem with public transport and roads – sometimes its jampacked and at times, totally empty (with no single auto / bus to your destination). I was a victim of the latter when I had to reach Majestic to meet the WOW gang for the trek. Somehow, with God’s grace, managed to reach on time [5 minutes late, according to IST, is considered on time :P]. Thankfully, I wasn’t the last one [was the last-but-one] to reach to the TT. Met few old faces, many new and began the journey to Savanadurga, with a brief round of introduction to one another.

No music system in the bus, meant chatter-boxes continuously at work – and the troupe of 20 gals randomly started chitchatting in separate groups based on their comfort level. And here, we, the last benchers in the bus, got to interview our ‘Organizer-turned-first-time-WOW-Participant’ on her journey of trekking and BTC. And realized that real blood (donated to leeches) and sweat have gone in coming up with BTC and WOW! [these were interesting..willing to explore more of the inside stories ;)]

After breakfast and a small session of dance on the road (at a halt for recreational activities), we reached Savandurga.

The Rock and the t(r)echniques:

Savandurga, as the facts say, is one of Asia’s largest monolithic rocks. More details about the place here Wildlife includes bears and leopards (we did get a bear alert from one of the villagers at the base itself. Thankfully, we encountered none!)

The entire group was divided into 4 teams [for the first time I was in the Lead group! Yayy!:D], and we started climbing up. The Giant rock, with no proper route carved on it, makes it a core trekking activity (you really need some experienced trekkers in your group, to be able to figure out the right path. It gets tricky and a bit risky, otherwise!). This being a moderate level of trek (with a good amount of steep and no support whatsoever) was a real challenge and demanded diligent climbing and descending.

The technique is to bend your body towards the slant (bend forward like a bear while climbing up and bend backwards against the steep while descending). You also need to control your entire body on your calf muscles (demands a lot of calf strength). [Trekking is about fitness and techniques also -  you see! ;)]


At places, even these techniques don’t work. The only option is to move with all your four limbs [climb up like some animal and while descending, you need to sit and slowly slide down]. {Now you know, why is it a ‘moderate-level’ of trek}.

A tree-climbing somewhere in between the trek, aroused the ‘animal instinct’ in few of us and made it relatively easier to trek the rock ;)

As we kept ascending, the sun kept shining gloriously at us, making it a Hot-trek (difficult to decide which one was Hotter – WOW or the Sun :P). After beating the heat, reaching the peak felt triumphant! Took a much-deserved break on the top – had a small group-photo session and then everyone dispersed to savor the Nature and the View, in their own sweet ways. Though the entire surrounding was dry, hot, and barren – the view of river Arkavathi (from the peak) and the green beyond it was a retreat. Happy that we were among the early birds for the day.  Spotted many other groups following our trail seeing us on the top :D)

Descend was a tad more scary this time. However, it successfully brought out the adventurists in us. With the girls helping and motivating each other, we got back to where we had started from – safe and sound. By then, the Sun started playing hide-n-seek with the clouds [and we were thankful it did not rain while descending]

By the time we reached the base, most of us were worn out due to heat and humidity. It was time for Lunch B-). Visited Manchinabele damn (only 1 girl in the troupe could pronounce this correctly!). Unfortunately, the entry was limited due to an accident that had taken place just a few days ago. Nevertheless, watching the serene waters of Arkavathi river was a breather. Had a small break near the damn and started out for lunch.

For lunch, we halted at the same spot where we had our breakfast. Lunch toh aise kiya jaise koi shaadi par aaye the..The fact that Curd was available (after beating all of that heat) felt a great relief for few of us (read Tamilians!), and we mercilessly attacked on food. Owner-uncle looked genuinely happy serving food to the gang of girls (on enquiring, he revealed that he rarely found people emptying their plates so quickly and asking for more – which we did – like gluttons!)

After enjoying a hard-core trek, and filling ourselves up with satisfying lunch – it was time for some Fun. By late in the afternoon, we reached the Big Banyan Tree, for chillaxing.

After brainstorming for games, we finally zeroed in on – Dumb Charades. Now, our WOW team had a small patalam (gang) of people hailing from Tamil Nadu [who happily ignored which group they belonged to, helped every other Tamilian in the game :P]. Loads of creative (literally out-of-the-box) Enacting happened to come to the Hindi movie titles and that triggered loads of laughter! These girls added a ‘Fun-element’ to the entire trip! :P. 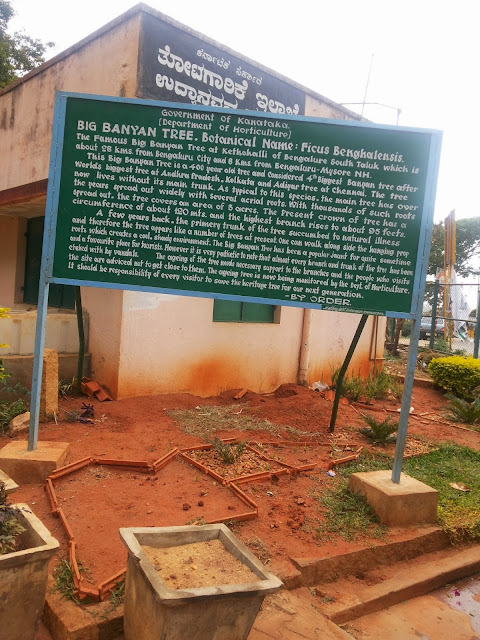 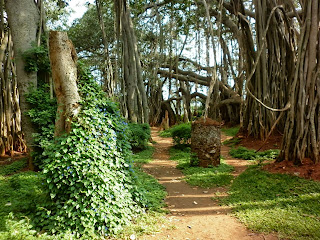 The day was truly a perfect weekend escapade – with a balanced amount of adventure, fun and chitchatting. We finally called it a day and started on our way to Bangalore. And yeah – what a Time Management! Everything went as planned and on dot time. By 5.30 in the evening, we were at Majestic (so you can ignore the 2 of us making it late to the TT in the morning :). With yet another promise of meeting up in future treks, we dispersed to our respective abodes.

Congratulations to Kiruba on her first trek as an Organizer:)

Congratulations to all the ‘first-timers’ (including you-know-who :P). You really did a great job :D

Despite the tough climb, personally, this trek had been an extremely Peaceful experience (would have pestered people around me with this dialog again and again! :D). Reasons? I don’t know!

All I can say is, with such beatitude experience, trekking is turning into an addiction…